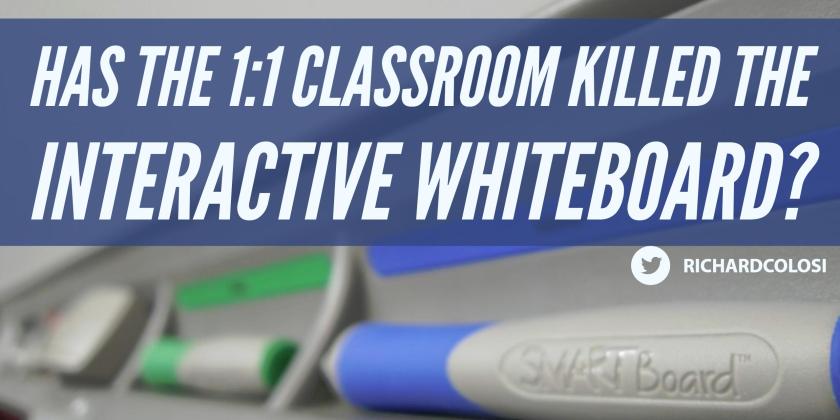 When I first started teaching in 2006, I loved my SMART Board.  And if you taught about a decade ago, chances are you probably did too – with very good reason!  Back then, standard tools for instruction in your classroom probably consisted of things like chalk boards, overhead projectors, or VCR/TV Combos.   While the “digital natives vs. digital immigrants” narrative was out there, technology integration was usually an occasional event, like trips to the computer lab or playing a video for the entire class.

Then – out of nowhere – we discovered the Interactive White Board (IWB) and it blew our minds. Whether it was made by SMART, Promethean, Mimio or many of the other manufacturers, an IWB was an impressive looking device.  It was one that all teachers wanted because it allowed them to drastically improve the visual material presented during direct instruction.  Students could come up and interact with the board during a lesson too and they loved it.

As a teacher with only chart paper and a chalkboard, I remember wanting an IWB bad!  So bad, that instead of waiting, in 2007 I entered and won two national video contests that earned my district two SMART Boards!   I wasn’t alone.  Within a few years, many school district around the world would install an IWB in nearly every instructional space including libraries, conference rooms, and even a few offices.  And if you were one of the companies that made IWB’s, then this was a lucrative time period.  SMART Technologies, the market leader within the IWB industry, was doing huge business in the mid-to-late 2000’s, and they even went public in 2010 raising $600 million in an initial public offering.  One of the biggest on Wall Street that year.

IWB’s were everywhere and when teachers and district leaders talked technology – the conversation often started and ended with an IWB.  I can remember sitting in a staff meeting when an administrators asked the faculty about technology needs.   “We have SMART Boards,” one teacher said “what other technology do we need?”   This was a particularly eye-opening statement, because it highlighted the very limited view of educational technology that most teachers had at the time.

Don’t get me wrong, IWB’s were an exciting technology.  They provided teachers with a platform to create visuals for teacher-led instruction, which helped engage students, through the extent of the engagement is somewhat debated.  The problem, however with an IWB is that the device was extremely teacher-centered.  Despite some great efforts, most teachers (including myself) struggled to find a way to get the entire class involved with using the IWB.  When students did use the board it was the same “one student at the board, while everyone watches” dilemma that teachers have faced for years.  As a result, IWB’s were largely used as a direct substitute for a chalkboard – an expensive overhead projector, primarily used by the teacher.

Fast forward to 2017 – The current landscape of education is moving toward new individualized models of instruction focused around student-centered learning, personalization, and differentiation.  To facilitate these models, many schools around the world are dedicating significant resources to designing these learning environments in conjunction with the implementation of a 1:1 device model.  An effective student-centered 1:1 learning environment changes the instructional design of a traditional classroom centered around direction instruction on an IWB.  Here’s a few examples:

So the question is this: does an IWB still have a place within a 1:1 learning environment?

Perhaps this is just my opinion, but I sometimes struggle to find a way that a traditional IWB supports a student-centered 1:1 learning environment.  In my discussions with others on the topic, many will bring up advantages of having a ceiling mounted projector/workstation in a classroom – not about the actual IWB.

You can’t argue that the strength of the IWB is largely to facilitate direct instruction.  This isn’t a discussion of “student-centered vs. teacher centered” because I feel that both strategies are important within a classroom.  However, as school districts make significant investments in leveraging 1:1 to transform learning environments, such as The Blended Learning Model, the amount of whole group instruction is limited in favor of individual or small groups.

But let’s say you do want to facilitate a whole-class lecture with students.  What is the advantage of modeling a lesson on an IWB in front of the class, as opposed to sharing your screen with an Apple TV and modeling from your iPad?   In this situation, I feel that sharing a screen offers many more benefits than being tethered in one spot with your back toward the students.

Remember those IWB’s all of those school districts purchased a decade ago?  Over the next few years it’s going to be time to replace them, and many school districts are grappling with the question stated in the title of the blog.  To complicate matters some IWB manufacturers (such as SMART Technologies) now charge an individual license for their proprietary software, which previously has been provided free with the purchase of the IWB.  This is just an additional factor to consider when contemplating how to proceed.

What are the options then?  Some school districts are replacing IWB’s with large touch-screen LCD monitors by companies like Recordex.  The main advantage is that they operate much like a television or computer monitor and don’t require maintenance of the LCB projectors used with an IWB.  Others are keeping their ceiling mounted projector and simply reverting back to dry erase board or pulldown screens, utilizing media streaming devices.  These latter is a more cost-effective option that than paying to install a brand new IWB.

But if we’re talking cost here, what is the most effective way for a district to spend their technology budget?  If you’ve started a 1:1 program in your district, is this money better spent replacing IWB’s – a device used almost exclusively by teachers?  Or would it more beneficial to re-purpose those funds for other needs (software, hardware, infrastructure) directly associated with student devices?

Has the 1:1 Classroom Killed The Interactive White Board?  What role does the IWB play within the 1:1 classroom?  Here’s your chance to share your thoughts, comment in the section below